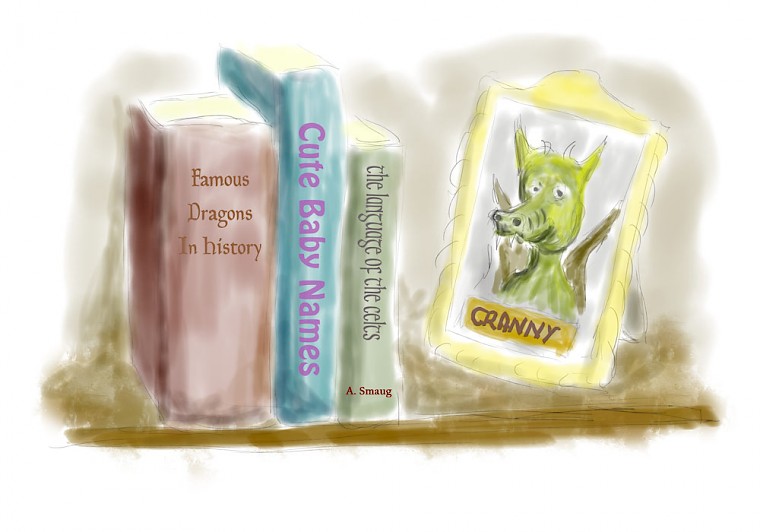 Some time ago I wrote an epic fantasy series called Dirt.  It is set on a world called Dirt (surprise, surprise) and has no relationship to our world at all, other than a sizeable percentage of the population are human and all the characters speak in English - well, in my version they do.

Early on in the planning, I made a few decisions about language:

That is a very loose set of rules, but it at least gave me a starting point.

Names for people, things, and places, are placemarks in History. Names in our own culture go in and out of fashion and they are influenced by events and other people. When I was young, the name Britney was unheard of, but a few years ago, thanks to a troubled singer, there was a veritable plague of girls called Britney appearing in school roll calls.

Some styles of names of people and places also have their place in history, though there is no accounting for retro!  So "Enid" was a popular name from the end of the 19th Century, as were Faith, Hope and Charity. They sounded out of place fifty years later, though they made a comeback in 1980s Britain with a certain upwardly mobile section of society.

Place names are similar. In the UK there are groups of villages that share the same root name.  For instance, Nether Wallop, Over Wallop and Middle Wallop.  But this has ceased to be a fashion in modern times, mostly.  It dates places not just to a certain point in history, but also to a certain environment. In this case, it is from a time where strong associations between small communities was terribly important not just culturally but for survival. They needed each other for mutual trade, support and to have enough population between them to have some regional influence.

Similar groupings are show up in people's names; for instance, a common surname or even first name within family trees. In a later volume of Dirt, I have a main character who shares a name with a minor character from 500 years earlier.  Simply by doing that, the reader might suspect that the earlier character may have married into the family at some point and her name became one of the little stock of names that the family often dipped into.  Without adding anything else, I have created a little history.

Leaving aside any invented languages, what should you consider when choosing a name?

For a start, even if a character or place is only met briefly once, the name should fit the environment, even if that is not explained in the context of the book. Because we are used to relationships between names, this will make sense to us and will feel natural. This becomes especially important if one is making up names; it is a matter of continuity.

Names also need to be pronounceable and memorable.  Actually, these two things go together; if a word is easy to pronounce, then one is more likely to remember it. If you use a name which is all consonants, with no indication how on earth you should say it, not only will the reader have trouble remembering it, but they will trip over it every time they meet it, ruining their enjoyment. (I ran into that problem when recording the Doomsayer Journeys - to be fair, it was a joke). In addition, think about why parents give children certain names.

Names that mean "beautiful," for instance, are often rather beautiful in themselves, or have a link to a historical figure who was beautiful. If you are inventing a name for a beautiful girl, then you may want to ensure the name is pleasing to the ear. Remember, the chances are that the person was named by a parent, not themselves. So they might have grown up to be the "Dark Lord," but when they were two years old, "Little Eric" suited them rather better.

If you have any pronunciation rules, stick to them. In Dirt I only have one and that is the letter E when used in an open context sounds like "Ay" as in lay and not "ee." I have a character called Be-Elin and her name is pronounced Bay-Elin.  I have an ancient people called the Heinela and this is pronounced Hey-In-Ay-La.  Note, this only applies to made up words in the books.

Use suffixes or prefixes to group names in some way. This can be fun, but don't overdo it!  I have a country where this is common for villages. They use Sarn in front of village names like Sarn-Lien and Sarn-Tailin, while a local heathland is called Tailin Moor.  This has allowed me to easily show common history without actually having to spell it out. It is a little signpost for the reader.

I am also doing this with my dragons.  Be- indicates an unpartnered female dragon while Mab- indicates an unpartnered male, and can also be used like Son Of someone, though this is archaic in dragon culture.  If they partner, then they change their prefix to Fren and Bren respectively.  It sort of means Queen and King, but of themselves, not of a land.  (By the way, those of you who are wiser than I will notice I have been stealing from Welsh here.)  Now, these are not titles and should not to be confused with Mr and Mrs, but become part of the name, though a close friend might drop the Be- in an informal situation.

Remember, however, I like to add a little history, so there is also an archaic form of Be- which is Bien (Bee-Ayne).  Really that is for fun, but it all adds colour.

If you want to increase historical perspective, then creating names that need to be explained can be fun. I have tended to do this with places rather than people, especially taverns which often have long histories.

In my world, English is pretending to be the common tongue, but it has roots in much more ancient languages.  For these I am corrupting Anglo Saxon, mostly, but the dragons are adding Welsh to the mix, or a corruption of it.  I have done this so that I do not have to invent an entire dictionary just to think of one word - I go steal one instead!

For instance, I have birds called Scimrafugol. I have built this from Scimeran, Anglo Saxon for shimmer, and Fugol which means bird.  They are a Sun Bird basically, because they fly incredibly high.  I have done this a lot, but I don't think even old English scholars will spot all of them and they are not meant to.  This is just my trick to force myself to be consistent.

If you create yourself a set of rules and resources, should you break them or ignore them?

Yes, but only sometimes.

If history has taught us nothing else, it is that influences can be diverse and unexplainable; how words might be corrupted over centuries can seem difficult to fathom. While most of my names are made up, I do have a character called Ben and another called Martin, completely unexplained!  Why?  Because the names fitted their personalities and sits well within the text.  So I went for it.

I have also used common words for names a few times.  The hero of my first volume is called Johnson Farthing.  It is an unusual pairing and slightly silly, but if you read the book one day you will understand the joke involved and by the end it feels completely natural.

I have broken my own rules, but with care. And when I need to ensure that I fix the name of a person or place in time and within a culture, I have stuck to my rules closely and taken time over my choice.

So, to wrap up, if you are writing a fantasy, take your time over the names and remember how people use them.

Finally, a note about word generators.  These are a lot of fun and I have played with them from time to time, but they cause problems.  Some of what they produce look great until you try and say them aloud. And there is no proper continuity or historical link between them other than possibly word construction, so they become just random collections.  Use them if you are looking for ideas but come up with names thoughtfully yourself for your book so that they make sense and add to the fabric of your world.

Remember, most of the time in our world, NOTHING is named randomly.  Someone, somewhere named a place or a person for a reason, even if it was just that they were the fan of a pop star.