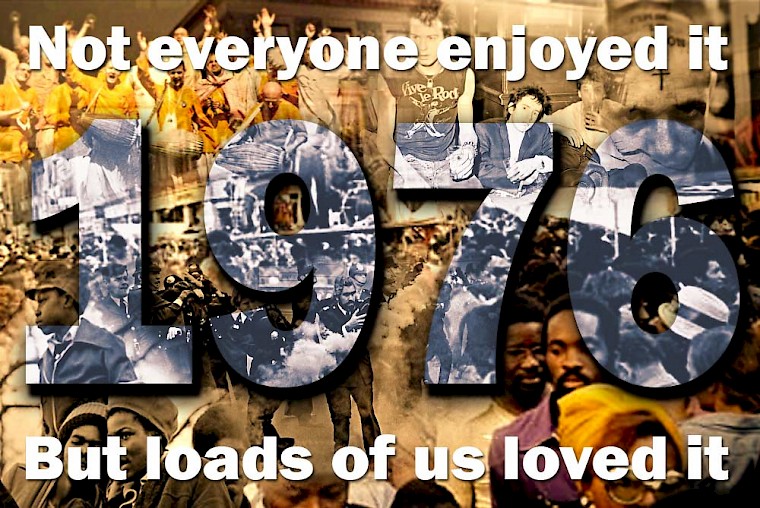 This article also appears on The Stink Books website.

The Stink is set in 1976 which was the longest and driest summer on record. For me, that was pretty much perfect back then and perfect again when I decided to write this book.

But the setting also allowed me to address certain issues that were kicking around back then; actually they are still around now, but not as clear cut.

Before I get into that, let me make one thing clear. I don't give a shit what the historians say, we did not all walk around in a state of depression and neither did all the streets stink of rubbish. Yes, some people had it tough, there was a lot of problems and the dustmen did go on strike, but like everything else in Britain, these effected some very badly, some only a bit and loads of people were not effected at all.

Likewise with Punk. Punk is really important to the history of music in the UK, but most of the young people didn't like it, a lot of venues wouldn't have punk bands and it was there and gone in a flash, to be honest. Disco, on the other hand, is still with us now and Abba just refuse to stop being popular. I wasn't big on punk, to be honest and neither are The Stink. It excites them and their friend's band is a punk band, but it is not their thing. There were a lot of rock bands on the circuit who were not punk but gigged at the Marquee Club and at Dingwalls and other places like The Nags Head (a bit of an influence for the Adam and Eve pub in the story).  So, punk was there, was great and then it had gone.

A lot of things in the seventies were like that.

It was different back then

I would like to say it was exactly the same, but no it wasn't.

There were no mobiles, so when you left your house you were free! Yep, ask the average teen back then if they wanted a device which meant that their parents could track them down and nag them anytime they liked and what do you think the reaction would have been?

Fashion was going through a really bad phase.  Actually, fashion probably always is but back then even the teenagers were sceptical about half the things they were supposed to like. For girls, platform shoes and boob tubes were accidents waiting to happen; the combination of the two could get the guys lining up around the block.  Male fashions were pretty much restricted to the disco, so if you didn't go you avoided a whole raft of terrible shirts and flared trousers that were just embarrassing. The dancing style didn't help either.  There was a large section of young society that found John Travolta simply funny.

What you remember is often what the media want you to remember, or  is stylized by how they covered stories.  The seventies saw the end of news being filmed and the eighties would see ENG - electronic news gathering - complete with strikes at the BBC against it. Meanwhile, the cheap film used for news gave everything a pale, washed-out feel; it really can't have looked like that, but those films have corrupted my memory, damn them.

Industrial relations were at an all time low, though the eighties miner's strike would be terrible. There were two problems as I remember it; the workers WERE underpaid and the unions WERE stuffed filled with people with heavy political agendas and who didn't give a damn about the workers really. Into this add a useless prime minister and "Nasa, we got a problem." Hence the ongoing difficulties with the dustmen (actually, I don't think they were on the strike for the whole of the 70s and really mostly in 1978/9, but it felt like it).

The seventies were a sort of in-between  time, stuck between the pointless idealism of the sixties and the greed of the eighties. It was the decade that would put a final barrier between WW2 and the future. This was the decade where kids had no recollections of the war at all and even many of the parents had not been old enough to fight, so attitudes changed and the importance of the second world war started to fade. "I died in the war for you," had far less resonance to most young people.

Hair styles were was not the only thing that happened in the seventies. Now, I am no historian, but to me the seventies had to be one of the most intolerant decades ever.  And if you were an intelligent, opinionated and rebellious teen, like Smell and the band, then there was lots of things to shock and annoy you.

It is no coincidence that the National Front get a bovver boot sized mention in The Stink . They were everywhere -  on the news, down our streets, sticking up NF and swastika symbols everywhere; you would have to be stupid to miss it.  Out in the suburbs they saw little of the NF, but you didn't have to get far into London to find them.  Black and Jewish friends of mine hated and feared them, and with good cause. In the late seventies I had a job down Brick Lane at a paper company and the "lads" there asked me if I wanted to go "Paki-Bashing" with them that weekend - I dumped the job that night. But the most shocking thing about the NF was not the skinheads or their heinous messages, it was that at the back of their marches, mixed up with the skins were ordinary people who agreed with them. People we went to school with or who worked in our local shops. In the story, Haze is horrified when he realises he knows some of the people on the march.

But this intolerance was not limited to extremists; it was in everyday life. In our playground as school "wog" and "poofter" jokes were common as they were on our televisions, mostly delivered by unfunny dinosaurs who should have stayed locked up in their abysmal working men's clubs.  TV programmes tried to take the piss out of intolerance and racism with sitcoms like Love Thy Neighbour, but all they did was make it cuddly and acceptable.  Did you know that the Black and White Minstrel Show ran on British TV right until 1978, even though it had been petitioned against in the 60s? Now I know a lot of people like to explain that it is some wonderful tradition; well I don't give a shit, because me and my friends back then found it racist as hell.

We were the generation that would abandon the crap comedians of our parents generation and embrace The Young Ones and The Comedy Store in the 80s - the seventies were our training ground to reject everything that hurt our friends.

One of the biggest issues for me was homosexuality. I had a close friend who was gay and it was only me and my girlfriend that knew. He kept it hidden from everyone - out of blind fear. It was crazy.  The laws had already started to change, it had been decriminalised in the late sixties, but although more and more people were declaring they were gay and Gay Pride had been running since the early seventies, it was still open season on "poofters" for many and if you had religious parents and were gay, then you were going to have big problems. Coward that I was, I didn't even admit to having a gay friend when at school - it would have got me beaten up. This has taken years to change and I wish the young of my generation had had the same easy acceptance of Gays and Lesbians as the young do now - way better.

In the book I confront this head on and I do not apologise that in the "coming out" scene the comedy vanishes and the pain and hurt drips from the page. I wrote it like that because I saw friends hurt like that at the time.

And some things are just the same

Although we had no internet, no mobiles, way less TV and even more boring Sex-ed than kids have now, being young back in the seventies was pretty much what it is like today.

This is actually far more important than people realise. Those of us who grew up in the seventies had massive problems with the generation gap. Our parents did not understand us, did not like our music, did not like our clothes and really did not want to admit that we may want to do adult things, like drink and screw a lot.

But if you are a teen now, then your parents are us. Your parents went to rock gigs, dressed badly, got drunk, had sex too young, swore, shouted and did everything you want to do and do do given half the chance. We even listen to the same bands, for gods sake! Stones at Glastonbury? CSI - theme tune? The Who.  We grew up with those sounds.

The second half of the sixties and the seventies are the turning point. This is when teen culture found its legs and ran for the hills to shout out its message.  The teens of today were created back then. We started it and have happily handed the baton to you who are teens now.

The Stink is about a young band and it is about the seventies, but more importantly it is about a movement, a way of being young, that has not missed a beat since, despite the attempt of members of the establishment over the years.

So, if you were born well after the events in this book, when you read it, remember this: Sex, Drugs and Rock 'n' Roll and being young was what our life was all about back then, and it is our gift to you now.