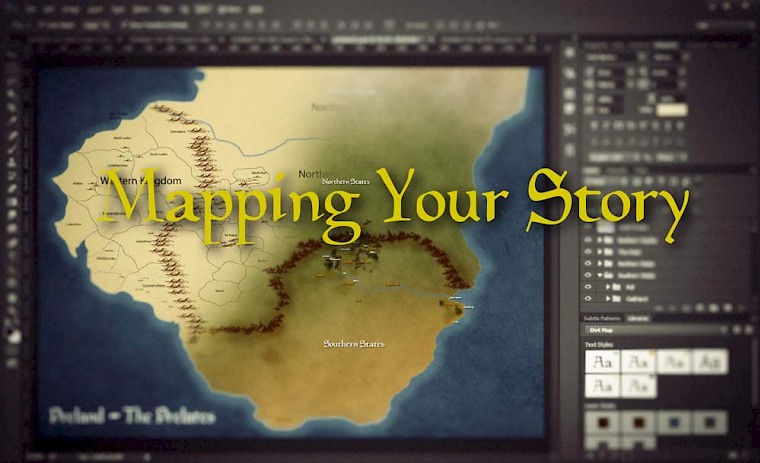 Geography is the bedrock of civilisation

The importance of mapping

There is no doubt that mapping is great fun! Especially when it gets to prettying it all up.  But there are some very important reasons why, before you get too involved in the joy of #writing, you work out your map properly.

To start with I suggest that you tell your continent travelling wizard to sod off for the moment. Generally speaking, most of the people who inhabit your world are going to be ordinary and stuck with the transport of the day - mostly by foot and the lucky ones can add a mule or a horse, or equivalent stubborn fantasy creature.

In primitive societies, how far things are apart is based on how far and fast people can travel. If you are farmer making cheese to sell in the town market, then you do not want to have to travel too far to get there. You might have a cart, you might have them hung round your neck and be on foot. If you are going to travel, then you have to have lots of time. In one of my books, a character travels with her father halfway across the continent each year to sell their special cured meats - they have to allow months for the round trip each time!

On the other side of the coin, if you do need to have a village or hamlet in a very isolated part of your world, then the very fact that most people simply will not travel anywhere, means that the village will need to be self sufficient or they are going to starve.  So, they better have access to game, water, wood, stone and fertile land to grow their foods as well as have knowledge of their environment and the tools to cope with it.

In early societies, the vast majority of people simply did not go anywhere, even if they were part of a more densely populated region.  If the next village is in the "Next valley," then that could be a hike of ten or twenty miles round the hill. If you are herding your sheep with you, then you need lots of time and someone will need to stay behind and look after the farm.

Allied to distance is speed of travel of course which can be a headache, to be honest.  Read this article for some basic information, but remember, that nothing is perfect and you should allow more time than your calculator has just told you!

In old worlds, these are pretty much the same thing.

It is no coincidence that a county or province or country might end at a big river; if the society is not very good at building boats or bridges, then that is the end of their world. Likewise, a mountain range could split a country in half in such a way as to make the two halves ungovernable; it just takes too long to get past it.

If as part of your story you want a major geographical feature, then a map will very quickly tell you whether that will have other implications to the people who live nearby.  Do they know the people the other side of the river? Are their trade opportunities? If it is a river, do they trade up and down it? If it is a mountain range, does it have good enough passes? Does it have any?

If your character has a brother that lives the other side of the Alpine Ridge, but "they are very close," you might want to ask yourself how they managed it. The reality is that they probably haven't seen each other in years.

And, of course, if there is a political boundary as well, your characters might have to be aware of different laws and cultures as they move from one region to another.

Don't forget that if you are painting an early civilisation that you may not have to travel far to find huge political differences. If your land is made up of small waring barrons or kinglets, then two villages just a few leagues apart may have different ideologies that effect your characters' movements. I have been especially wary with some young female characters in male dominated lands; one village might be very open about women travelling, another might think they should be at home bringing up the children. A river between the two might be all it takes to define the differences.

The Pace of the Story

Probably the greatest affect your map will have is on how fast your story runs; it may even affect your writing style.

"Let's rush and rescue the princess from the hungry dragon!"
"Where is she?"
"On the huge mountain in Faraway land!"

In my current book I made a very determined choice to make time the enemy of the good guys. I want them to have to take weeks and months to get to places, I want them to have to face the challenge of having to plan in terms of years, not days.  But if I wanted the story to be about rushing around very quickly and beating each other up, then my map would have been impossible and I would have had some very impatient characters.

It has worked well. In one story, a character who has had the luxury of traveling by dragon, finds themselves back on a horse - what took them days now takes them weeks and it changes their timeline and their story completely.

So, when you create your world, you must think about pace. If your entire story is spread over a few weeks, then your world, your map, needs to be small enough. Mapping out will soon tell you whether you have just got that spectacularly wrong, in either direction.

So, now you know WHY you are mapping, here is how!

Next: Your Working Map »

I Hear Your Voice

Getting Featured on ReverbNation

Getting ready to record Dirt series one

Who are the women of Dirt?

Planning a Novel is Vital and Fun

Dealing with Politics in Young Literature

Shadow Stalker - The Writing of a Serial

A new idea and a new writing partner?

Setting up StyleWriter 4 for editing Novels

Dirt - Planning the Next Huge Saga

Why you should have a dedicated site for each book