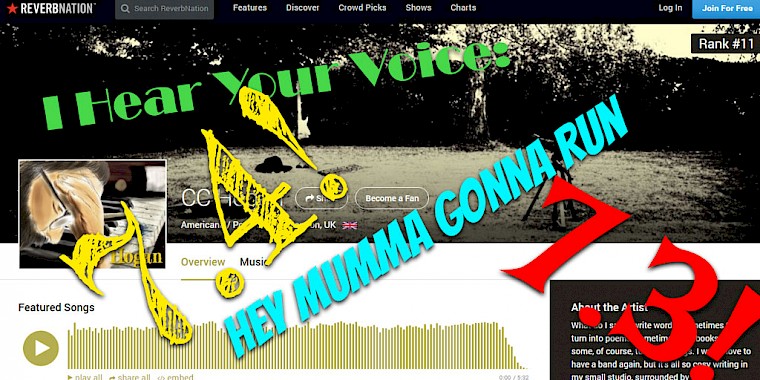 There are some nice people out there.

I have a very mixed relationship with reviews. I know everyone says you should take bad reviews on the chin like a grown up, but I can't help it; when I get a baddy, I sulk and fret like a ten-year-old.

So, seeing an opportunity to put up two of my songs to be reviewed on @Reverbnation left me feeling a little undecided. I have only just joined the platform, so what if they hate them? What if they think I sound like a total amateur? What if they don't understand my lyrics?

Well, after pacing up and down and banging my head with my bottle of rum (damned thing was empty, so drinking from it was no good), I decided to take the risk and hit the button on Hey Mumma Gonna Run and I Hear Your Voice.

Then all hell lose.

No, not at ReverbNation, but on my PC. I had an error on the system and decided to chat to Microsoft about it. They poked around inside, messed something up and crippled my system. I spent the entire weekend running a repair which was only partly successful and left me with more problems than I had started with.

The long and the short of it was that after four long sessions online with MS, they were no closer to a solution and suggested I did a fresh install, which would wipe out the very complicated music installation. But suddenly, I had a brainwave. I tried to reinstall the program that they said could not be reinstalled just like that. It worked and the system is now fine.

And then, an email turned up from ReverbNation saying my two review reports were ready.

With nervous fingers, I navigated over to my site and opened up the reports. 7.4 and 7.3 out of ten and most of the reviewers said they would happily listen to the songs again. BRILLIANT!

Some of the comments were nice too:

"I loved the harmonica at the beginning of the song. I enjoyed the vocals. They were very clear and easy to understand. I liked the tempo and melody of the music."

"Excellent guitar work is the hallmark of this song. I also enjoyed the vocals because the lead singer has a raspy voice that provides interesting tonal quality. The percussion is also very dynamic"

"Vocally, this one was solid. The singer sounded a bit like Van Morrison. Lyrically, a fun song with interesting lyrics."

"I really love the harmonica intro! The instrumentation is very good. The beat is great. The lyrics are nice. And, of course, CC Hogan has an awesome voice. I love everything about this song. Another great one, CC Hogan!"

I think I want to marry that reviewer!

So, one way or another it has been a good day. Despite my bluster and selling of my work, I really do lack in confidence about everything I write, music and words, and these reviews cheered me up.

Will I put more up for review?

I don't know .... getting nervous again!