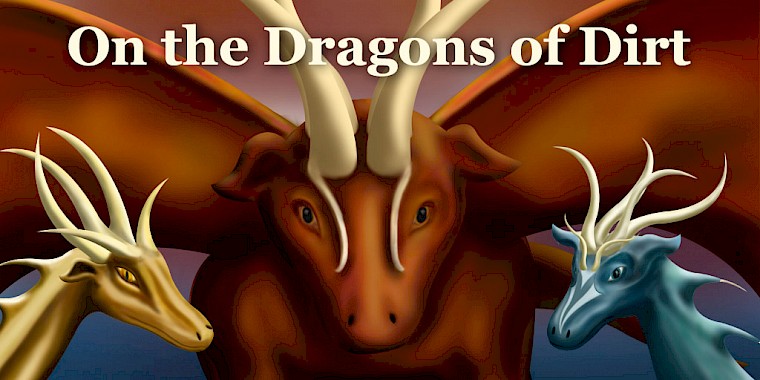 In series two, I make the point that human society has diminished since the departure of the dragons.  Humans and dragons need each other, and we probably need them more than they need us.  Humans are better at mining and creating tools than dragons.  We have a better understanding of technology.  We are better at building too.  But dragons bring us the ability to pull it together; not just over vast distances but over time through their many centuries of life.

In Girls of Dirt, book one of series two, Mab-Abin the desert dragon and the Ancient called Ferret, Weasel’s daughter, talk with a council about how they are slipping into autocracy by allowing their mayor to remain in office for many years and to name his successor.  They suggest they should rethink their policy and Ferret gives them a gentle warning:

Ferret climbed up on the dragon’s back as the council took a pace backwards.  “Choose carefully, council,” she said.  “Some choices may have implications down through many years.  My friend here will live to see the echoes of your choices though centuries.”

Dragons are not wiser than humans, they are not cleverer and they are not immortal.  But the very fact of their long lives creates huge differences.  There is no racism in dragon culture, there is equality between the sexes, despite some silly joking, and where there is respect, it is not offered simply because of blood-ties or title.  When you live so long, if you do not build friendships, the final loneliness would be overwhelming.  And for dragons, the idea of friendship is what keeps their society strong and beautiful more than anything else.

I will leave you with an excerpt from People of Dirt and the words of the young dragon rider called Lena.  A group of dragons and humans have battled through a snowstorm and have landed in a village where the villagers are starving.  The people there are scared and have been taught that dragons, a creature of myth by this time, are demons.  When it turns out one of the riders is a knight called Sir Hallis, someone they know, and the dragons are offering to bring food and chop down trees for firewood, they don’t know what to think.  Lena talks to a young man called Jeak.

The wind had calmed down slightly and from outside came three large crashes.   Lena opened the door.  “The dragons are back.”  She looked over at the young man and called to him.  “Jeak, come and meet Be-Sula.”

“Why?” he asked, confused and upset.

“Please, just come.”  He stood and pulled on his rough coat and Lena took him by the hand out to where the dragons had dropped five huge trees and a pile of fallen wood that they had collected in the last couple of hours.  “Be-Sula,” she called out.  “Come and meet Jeak.”  The large, powerful desert dragon walked through the snow, put her axe down and lowered her head to the young man.

“Hello, Jeak.”  He said nothing and barely looked up at her.  “My name is Be-Sula, and I am a Draig yr Anialr.  People often call us desert dragons because of our colouration of tan and cream.  The others here are Draig Mynyth Coh, red mountain dragons, except Rosie, who is a sea dragon.  The reds love beer, you know, and like to sing.”

“We don’t have much beer and it is very weak,” Jeak said nervously.

“Mab-Erandine,” Be-Sula called out.  “Have you got any spare beer on you?”

“Could do.  I need to keep the barrel for this king we are going to meet, but I have a large skin.”

Mab-Erandine, a large red dragon the same size as Mab-Corn, wandered over and stood up to take a skin from his bag.  Jeak jumped back as the dragon stretched up to higher than the trees in the small square.

“Sorry lad; didn’t mean to scare you there.  Here.”  He passed down the dragon-sized skin and Jeak staggered under the weight and sat down in the snow.  He looked up, and tears started forming in his young eyes, unable to understand the generosity of this creature who he thought was a devil.  “Oh, now, young man, don’t you be crying over beer; that would never do.”  The huge dragon reached down, picked Jeak up by the hand and dusted him down as a man might a tiny child.  “Go on, drag that inside and empty it into something, then bring me the skin back.”  Jeak tried to lift the bag, and Hallis and Hornan rushed to help him as two more men and a woman appeared from one of the other houses.  “I don’t think it is a good idea for him to try to drink all of it on his own, do you?”  Mab-Erandine called to them with laughter in his voice, waving the people towards the tavern.  He then turned back to the tree pile, humming tunelessly, and picking up his massive axe, chopped a thick trunk clean in two.

Sir Hallis walked up next to Lena.  “That was very good.  You and the dragons know how to win people over.”

“No, we don’t,” Lena said to him.  “Dragons just know what friendship is and what it means.  Most of them are not big on family; they live too long you see, and their families move around a lot.  But friends?  There is nothing more important to a dragon than friendship.  Nothing.”

The Dirt Saga is currently in two series consisting of eight books.

Plus the short story Yona and the Beast.

Mapping out your incredible journey

How fast do they go in my fantasy world?

Using Word for Writing a Novel

Do you cuddle up to your characters?

Indulging in the wonderful 1970s

The Perfect Tavern in a Fantasy World

Don't forget to let your characters be Silly

Does Your Dragon Wear Clothes?

Using Onenote for your Novel

Lost in my Own World